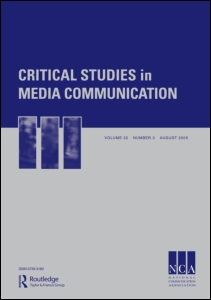 Center Associate Lindsay Palmer, Assistant Professor in the School of Journalism and Mass Communication at UW-Madison, has new research out in Critical Studies in Media Communication on the role of freelance war correspondents in the digital age of covering the “war on terror.”

ABSTRACT: This article examines the unique ways in which the figure of the freelance war correspondent is entangled within both the material and discursive logic of the digital in the age of the “war on terror.” Because freelancers increasingly work across media platforms and without large crews, these media producers are lucrative replacements for staff correspondents, especially since news organizations can opt out of paying for their insurance or safety training. Yet, freelancers can also be abused and discarded as soon as they begin to trouble accepted notions of journalistic authority—authority that is both a discursive and a political-economic construction. Following this, I offer two case studies in which a mainstream news network aligns a freelance journalist with the purportedly more interpretive and subjective space of the digital in order to regain control over the political narratives engendered by the freelancer’s experience in the war zone. Ultimately, I argue that these instances reveal the larger ethical poverty of mainstream news reporting in the digital age.